This time let us look at our RUSH Dance Concert magic sheet; and let’s start with something simple – by adding our Strobe lights. Here we’ll use two Martin Atomic 3000 LEDs and patch them into Channel 701 and 702. The back of the Atomic 3000 light has a menu system; as do most intelligent lights. This allows us to change a number of settings – but probably the most important one is “DMX Starting Address”. In the previous lesson, a Dimmer was an Address and an Address was a Dimmer. This is because a Dimmer does one thing, turn up the intensity. Most intelligent lights can do multiple things so requires multiple DMX addresses. The Atomic 3000, for example, needs 4 Addresses …

So our first Atomic 3000 light’s starting address is 501. This means that the Intensity property is controlled by Address 501, Duration by 502, Rate by 503, and Effect by 504. We don’t want to specify all those numbers, so we just say “Starting Address”.

You’ll notice that EOS assumes the “Type” is a “Dimmer”. We can now change the type to match our fixture. Start by making sure that you’re in the Patch tab of the Patch display. 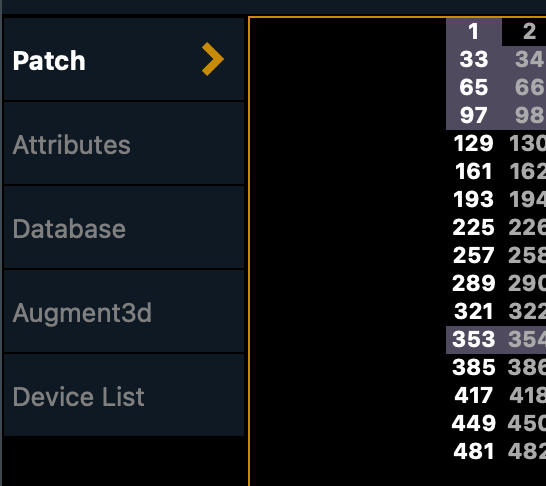 Now at the far right, you’ll see properties about the channel. There you’ll see the Channel Type listed as Dimmer.

If you click on “Dimmer” the screen will change and let you specify your fixture. You can either find fixtures already being used in your show, you can sift through manufacturers, or you can search. In the image below you can see that I selected “Search” and typed in “Atomic 3000” which popped up different models and modes of our light. We have the LED version and have it set to 4 channel mode (as specified above).

Go ahead and double click the Atomic 3000 LED 4ch.

Now you’ll see that the type has changed in our patch display; but you’ll also see that Channel 701 is now utilizing multiple Addresses.

This spread of Addresses, or the “DMX Footprint” as we call it, is an incredibly important concept to remember. If we were to make our second Atomic 3000 light a starting address of 502, I hope you can see that they would overlap. In fact, if you were to try and patch Channel 702 as Address 502, EOS would bark at you. 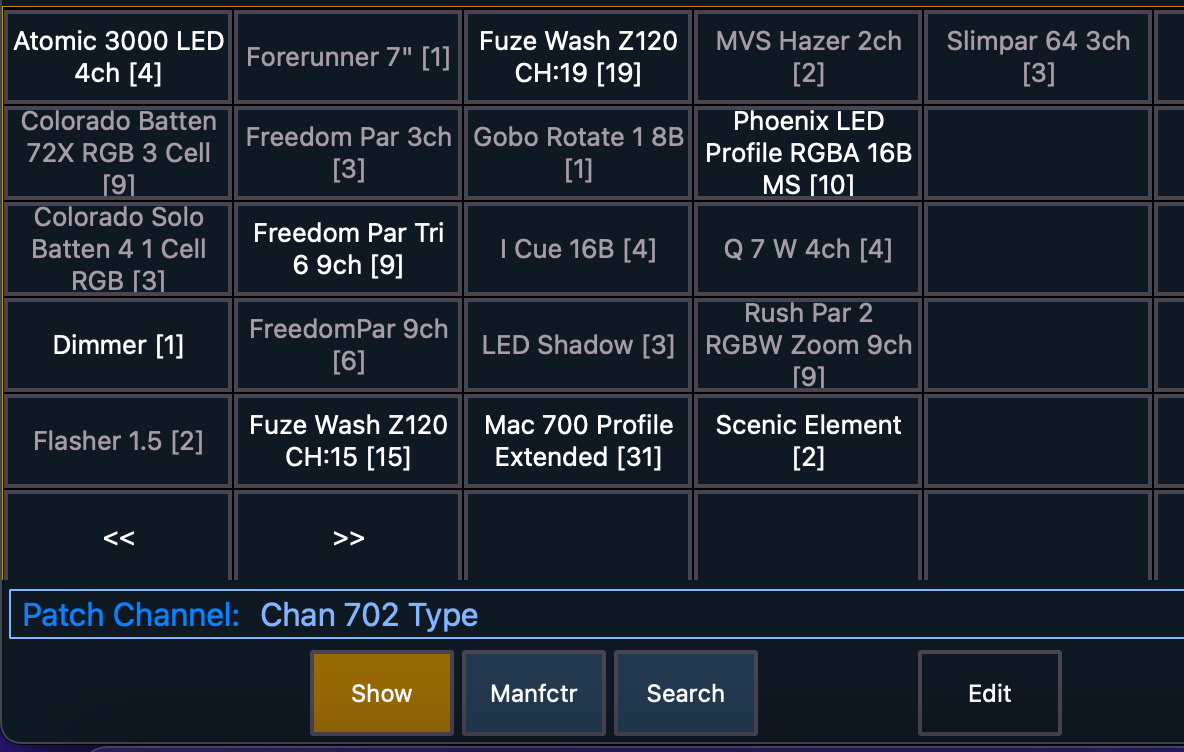 Alright. So that’s just two lights. What if we’re adding a whole system?

In the magic sheet, we already have listed two systems of booms; our shins (Group 141) and mids (Group 151). Lets at a 3rd system of lights – heads, higher than the other two systems – Group 161.

To follow the pattern we’ll use 161-164 and 165-168. And just like the other groups of lights, we’ll use Altman Phoenix 150w RGBW LED Ellipsoidals. These are currently set into 8 channel mode; meaning the fixture will use 8 DMX addresses. But when setting them up I decided to increment the starting address by 10 … because I’m lazy and didn’t want to do the math. And looking at my free addresses, I don’t have to be “tight” with my numbering. So I’ll number them starting with 131, then 141, 151, 161, 171, 181, 191, 201. Again, a numbering system that was easy when hanging the lights. Going a step further, I decided to number them in the same order as the Channels … DS to US and SR to SL.

Because I did an incremental order of addresses, following the pattern of my channels, I can now use the Offset command to make my life easier. So to patch a range of Channels I would type [#] [Thru] [#] [@] [First Channel’s Address] and EOS would fill the rest of the channels by adding 1. But here, that would mean 131, 132, 133, 134 … which isn’t what we want.

EOS will now add 10 to each address rather than just 1.

And now you’ve got a whole range of lights easily patched.

Let’s do one more, the Hazer. We use a Le Maitre MVS Smart Hazer in 2 channel mode. It’s starting address is 1. And we’re just going to leave it there because I want to show you a new concept. Looking at the range patch we just did, it’s easy to see how we can quickly and easily eat up all 512 DMX addresses. Here, for example, is a patch using just 9 Elation Fuze Profile lights in 59 channel mode.

Just 8 lights now leave a small handful of open Addresses. In fact, I couldn’t add a 9th light if I wanted to.

This limit of 512 addresses is about how much information can be transferred in one “Packet”. A smaller size means faster transfers. And that’s good. But it also means limits like this. But that’s okay; because light boards like the EOS actually use multiple DMX “Universes”. Address 1-512 is “Universe 1”. The next universe is then the next set of 512 numbers, or 513-1024. “Universe 3” would then be 1023-1536 … so on … so forth.

So, we’ll patch it into Channel 999 by typing [999] [@] [5] [/] [1] [Enter]. You’ll now see that our channel has listed Universe / Starting Address. And hurray! There’s no overlap. You’ll also notice that the Type is already set. This is because I knew what the fixture was going to be before plugging it in so set the Type before you even got here. Your welcome!