While we’ve worked hard to avoid seeing the movement of lights; there are times when we do want to let the audience remember that we’re in a theatre and let the style of the lights be “loud”. This of course should be done tastefully and artistically. Theatrical examples could be a series of moving lights quickly snapping to a single location to drive focus, or perhaps a flashing of green lights as a character becomes evil. Natural examples could be a flickering fire or the pulsing of emergency vehicle lights from outside an apartment.

Many of these instances could be very difficult to create using a standard cue structure; but don’t worry, Effects are here to save the day!

An Effect is a setting that can be applied to a channel that will alter a parameter in a pattern. Specific examples …

In an ETC console these adjustments happen relatively and to scale. Specific examples …

If you’re a words person; hopefully that made sense.
If you’re a doing person; we’ll play around in a second.

In this lesson we’re going to discuss only how to use and adjust effects and how to record them into cues. If you’re interested in learning how to create effects from scratch or how to implement them into faders for concerts and other live performances; I would encourage you to check out this tutorial from the ETC website.

The Effect button is found above the Record button; and double tapping it [Effect] [Effect] will show you the entire list of available effects. Or, for the sake of this lesson, I’ve printed the standard list of effects found in any new EOS file on our Dance Concert Magic Sheet – found at the far right. 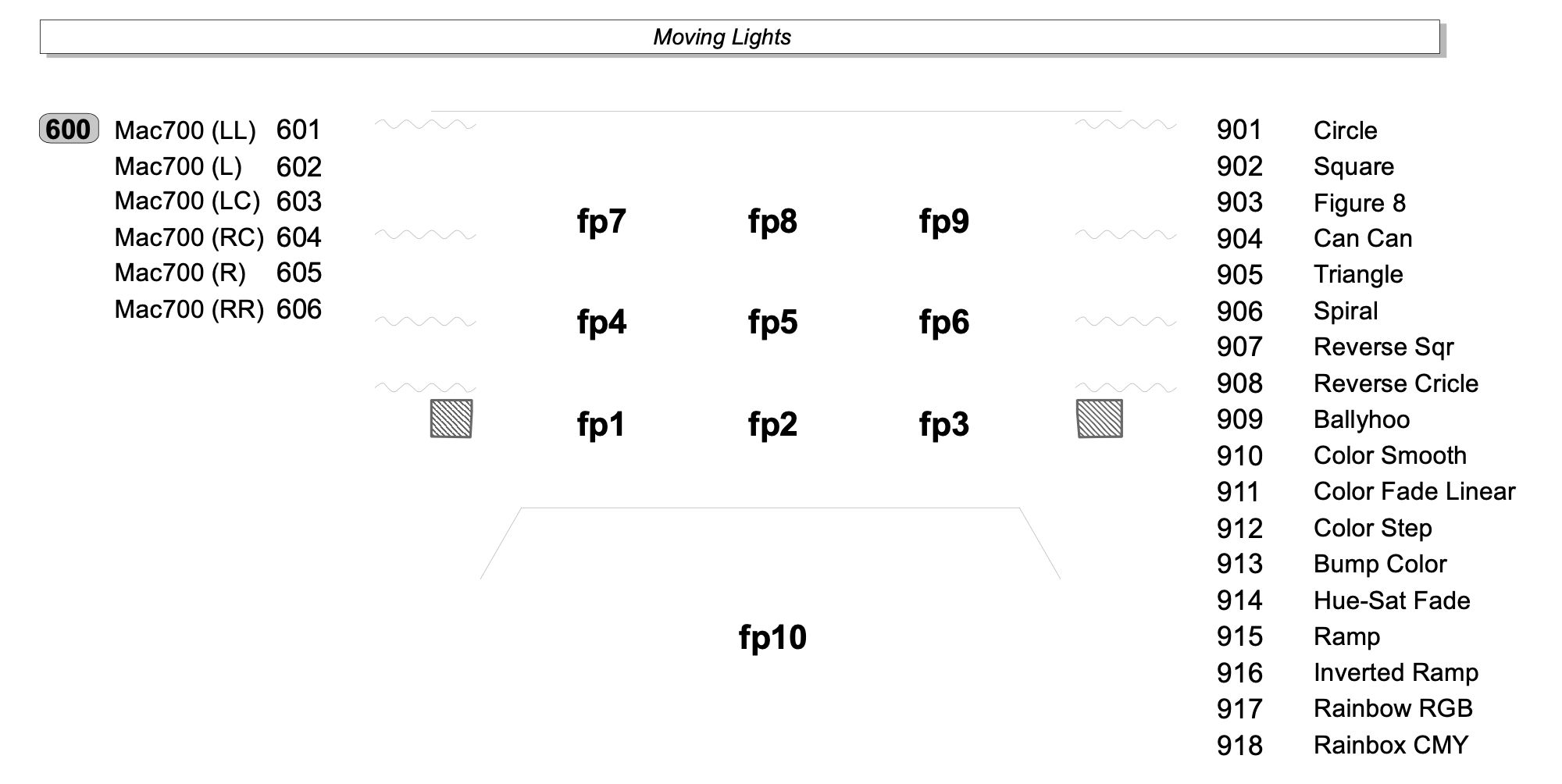 Let’s start simple with Effect 901 – Circle. In your lesson file, bring up channel 601 at full and set it to Focus Palette 1. This should show the light DSR. Applying an effect works similarly to applying a palette – specify a channel and give it an effect. So here we’ll type [601] [Effect] [901] [Enter].  You’ll see the light begin to make a circle around the DSR focus area. 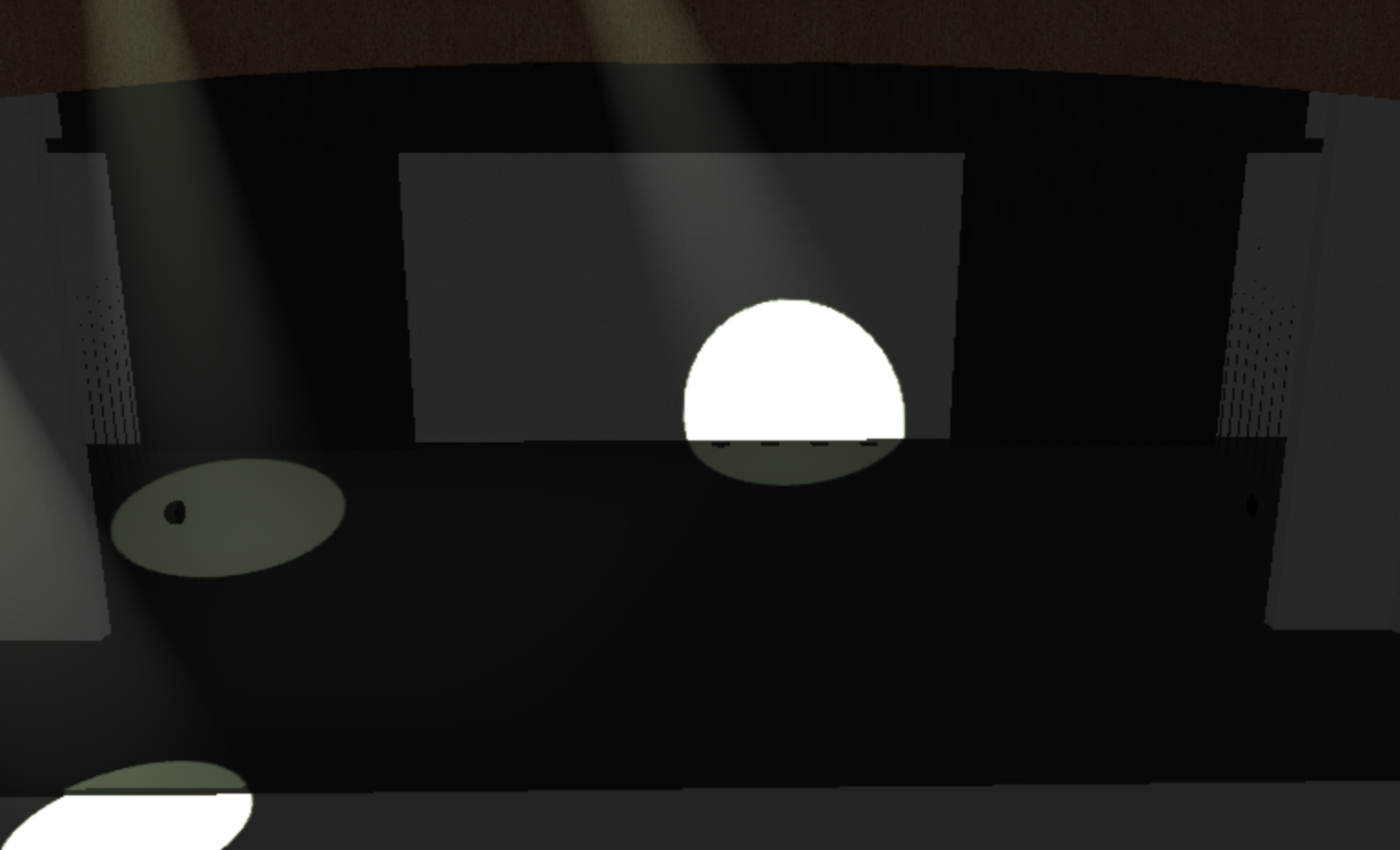 To stop this effect, we simply need to give these lights a “null” or “nothing” value for their effect. So type [Group] [601] [Effect] [Enter].

This will stop any effects running on any light in this group.

As you were watching these effects run; it might have been difficult to tell which light was which since the circle motions were so large. This is where Scale and Size come into effect.

To alter the way an Effect is running; clear your command line and press [Effect]. You’ll see a list of currently running Effects, their names, and the channels that are currently utilizing these effects.

Currently we only have one effect running, 901, applied to channels 601 through 603. At the far end of the list we see the Size column. We can adjust the Scale or Size of this effect by clicking in the cell where these two meet. You’ll then be prompted to provide a new Size. Enter in the number 300.

Now your circle motions will be much larger; encompassing the entire space. Let’s try the other direction. Click on the cell again and enter a number less than 100, such as 15.

Now your circle motions will be much smaller. You’ll also notice that the large motion took longer to make a full circle and that the smaller motion goes much faster. To change that pace we can alter the rate. So click on the cell under the Rate column. To make our motion go slower, enter a number smaller than 100 – such as 10. Now our movement is nice and patient.

If we liked this movement; we could now record this Effect, including our Rate and Size adjustments, into a cue. So go ahead and record this as cue 9.

Updating an effect works just like any other adjustment. Press [Effect] again and adjust the Rate to 50 and Size to 200. This will make a large, slow movement around the stage. Go ahead and press [Update] [Enter].

When transitioning into or out of an Effect; the Size and Rate will also fade. To help illustrate this let’s stop the effect. This time use the Stop Effect button at the far left side of the keyboard; [Stop Effect] [Enter]. This will make any Effect that is currently running, stop; not just the channels that you specify.

Go ahead and record this as cue 10, then record this as cue 8. This will make two looks, without the effect, to bookend cue 9. If you transition from 8 to 9 and 9 to 10; you’ll see the Effect itself fade, which will make a kind of spiral motion. Which is really lovely; that we don’t just snap straight into an effect. Of course; if that’s what you wanted, these settings can all be adjusted. Every choice has a time and a place.

Go to cue 0, a blackout, and bring group 601 to full. You should have a lovely line of lights, like this. 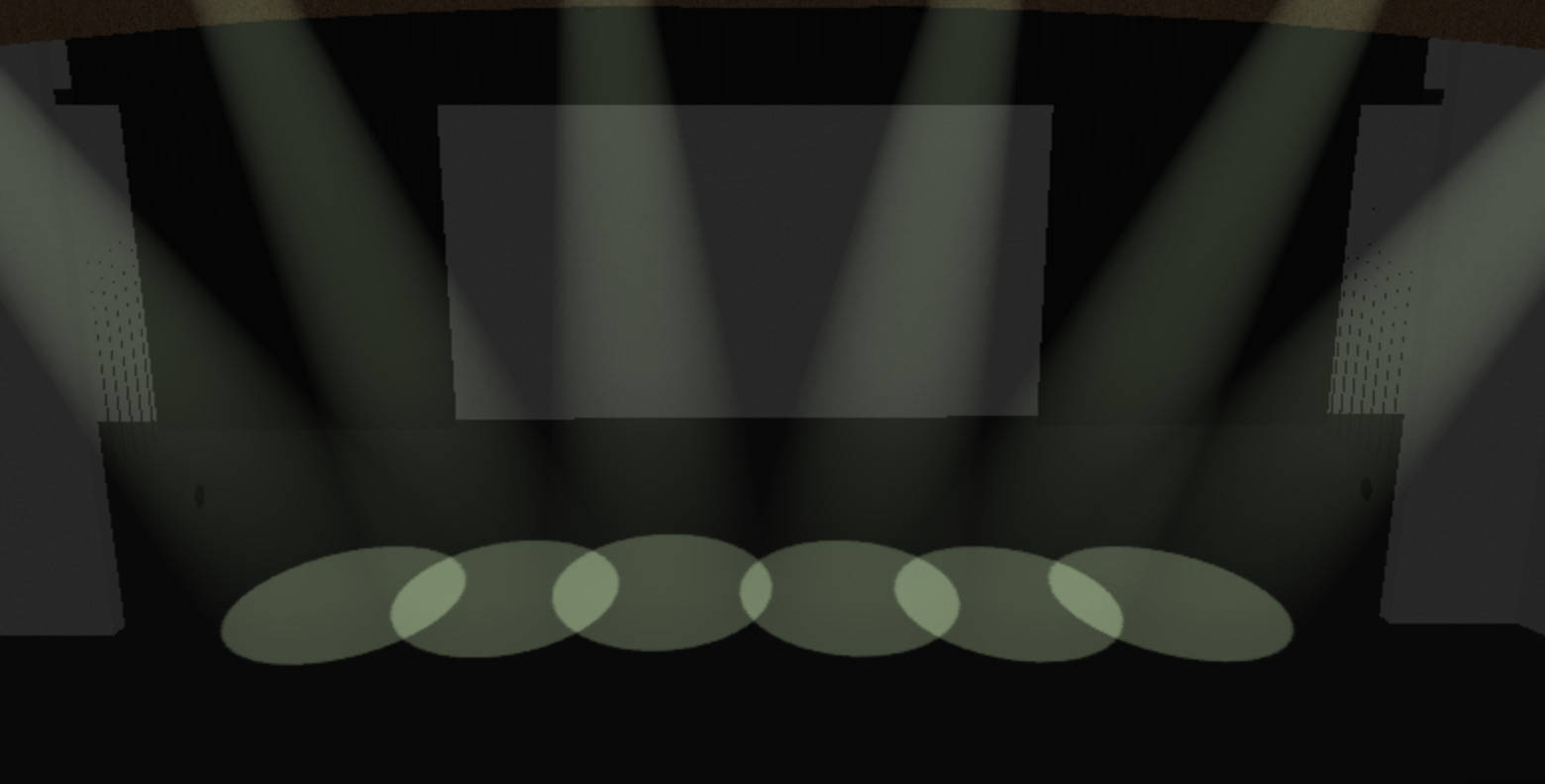 If we use an Effect that is a bit simpler like an Intensity Ramp. So type [Group] [601] [Effect] [915] [Enter]. This will create a chase of lights from left to right. But if we were to enter our lights in a different order, the order of the chase would also shift.

This will create a nice rainbow chase between all the lights. If you’re watching closely (or use Effect 915 again); you’ll notice that the chase doesn’t happen in order; because Group 60 is actually listed as 51-59 + 61-69 + 721-723. So to fix this problem, we could re-record Group 60 using a stage order rather than numerical order. That would look like this …

Finally; we can stack multiple effects on top of one another. So here would be an example of combining Effect 912, 915, and 903.

Combining multiple effects, changing color, and altering focus locations can create a whole multitude of looks. Really; you’re bound only by your artistic imagination! And time … playing around can be fun, but remember Voltaire’s adage, “perfect is the enemy of good.”